India vs England 1st ODI Live Cricket Match Today | Team Prediction, Fantasy Cricket Tips & Playing 11 Updates Joe Root and Jofra Archer are not the part of the ODI Squad, Liam Livingstone can make his debut in this game for England.

The first ODI between India and England is set to take place at the Maharashtra Cricket Association Stadium in Pune on Tuesday, March 23 2021.

After an entertaining T20I series in Ahmedabad, the action shifts to Pune for three ODIs between India and England. The hosts have triumphed in both the Test and T20I series and will be looking to repeat the trick in the ODIs as well.

India registered the series win in style winning the last game of the 5 match series. Although Virat Kohli and co aren’t in the best of forms in the 50-over format, they are favourites for the match. With their bowling attack also finding their feet in the T20I series, hopes are high among the Indians.

Shikhar Dhawan and Rohit Sharma will probably open the inning for the India team. Both are very talented players and played many attacking innings in previous matches. Virat Kohli will bat one down, and all eyes will be on him as he has not been able to score a century since the last 35+ innings.

Lokesh Rahul will do the wicket keeping for the India team. Yuzvendra Chahal will take care of the spin bowling of the team.

Bhuvneshwar Kumar, T Natrajan and Shardul Thakur will lead the pace attack of the team.

Their opponents, England, will be looking to salvage some lost pride with a strong showing in the ODIs. With the ICC T20 World Cup only a few months away, the English would want to familiarize themselves with the conditions.

There aren’t many new faces from the side that featured in the T20Is, although there might be a debut on the cards for Liam Livingstone with Joe Root unavailable for this series.

Jonny Bairstow and Jason Roy will probably open the inning for the England team. Both are well-known inning openers.

Liam Livingstone can make his debut in today’s game in place of Joe Root who is not available. Eoin Morgan, Ben Stokes and Jos Butler will take care of the middle order.

Eoin Morgan will lead the England team as a Captain. He is also a good Batsman. Jos Buttler will do the Wicket Keeping duty for his England team. Moeen Ali and Adil Rashid will lead the spin attack of the team.

Mark Wood, Ben Stokes and Tom Curran will take care of the pace attack for his team. 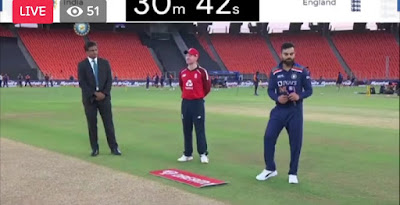 As far as the h2h records are concerned, India is way too ahead of England having won 53 games out of the 100 games.

India will be boosted with confidence after their recent series wins against England, they will be favourites for the match to win the game.

Quiz of the match

How many runs will Rohit Sharma score in this game? Tell us in the comments section of our teams.

1. In wicket keeping, both the wicket keepers are good. You can choose anyone.

2. The batsman may play a major role in this pitch.

5. Must try Shikhar Dhawan as captain in Grand leagues.