Samsung Galaxy S6 Versus iPhone 6: The Battle of the Gaints

The next year would be exciting for both the mobile lovers as the flagship phones from the leading mobile manufacturers, Samsung and Apple are making their way to the market.

Today, we will stack the Samsung Galaxy S6 with iPhone 6. The fight between the leading smartphone from these brands will give the hint who is going to dominate the flagship mobile market in 2015. So, why the wait? Let’s start the battle of Samsung Galaxy S6 Vs. iPhone 6

Samsung Galaxy S6 Vs iPhone 6: The Battle of the Giants 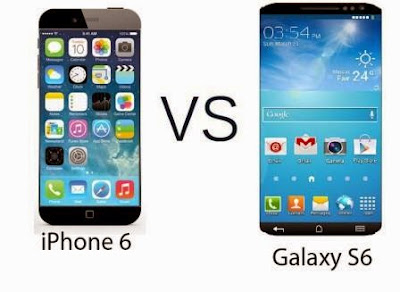 Apple has always been popular in the design criteria, and they have kept the river flowing with the right set improvements, including a 4.7 inch display. The phone is light and thin, scoring 129g and 6.9 mm in both the sections respectively. The body has an aluminium finish just like their predecessors.

Samsung, on the other hand, has really improved in the design section. The build has been improved from cheap plastic finish to metallic finish. The phone is thin, around 6.8 mm and have curvy edges to go with. A great leap from Samsung in the design and build quality section.

Apple has remained stuck to their previous processor, the A8 Chip that is simple dual-core processor with a relatively low clock speed of 1.2 GHz. But, it performs at par with the new Samsung Exynos 7420 Octa-core(64-bit) processor. The reason behind the same level of performance is that not many apps use more than two cores and Apple has full control over the app store, which only harness the power of dual-core processor provided by the Apple store.

Apple also provides a powerful Quad-Core gaming chip, the PowerVR GX6450. On the other hand, the Samsung also offers tremendous capabilities to play games at higher resolution. Not to mention, the octa-core can provide the necessary juice to bring the games to their maximum FPS.

On the RAM department, the apple iPhone 6 offers 1 GB of LPDDR3 RAM, whereas the Samsung clearly bits Apple iPhone 6 with a whopping 3 GB of next-gen LPDDR4 RAM. Both the smartphones offer non-removable battery, but Samsung offers a better wireless charging battery that can seriously hamper the prospects of Apple iPhone 6 in the market. On the fingerprint section, both the iPhone 6 and Samsung S6 offers great advanced fingerprint sensor for better protection and privacy.

Samsung clearly offers better display than the rival Apple iPhone 6. With a better pixel density and higher resolution, Samsung can be the choice of many people. Apple offers 326 PPI and Samsung offers more than 450 PPI density with high resolution.

With a high camera specs, Samsung might win this round, but cameras are more complex than that. Apple iPhone 6 8 MP camera is more powerful than the Samsung S6 16 MP camera. Though, it would be a close battle, but Samsung camera will produce much better images at low light places.

Both Samsung Galaxy S6 and Apple iPhone 6 are here to stay. But, the question is who is the real winner? Samsung has undoubtedly levelled up their game with excellent design quality, powerful processor and great camera, but Apple iPhone is not far behind.

The winner of this contest is Samsung Galaxy S6 hands down. Apple on the other hand, needs to improve their hardware to keep them in the game